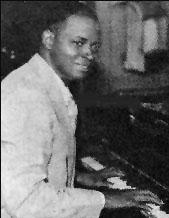 American jazz pianist, composer, band leader, record producer, vocalist, & businessman. Born into a musical family, growing up in New Orleans Jones played many instruments before making the piano his primary. Work included playing with Armand J. Pirons` Olympia Orchestra & some time with King Oliver. Moving to Chicago in 1919 he set up Clarence Williams publishing company & music store. While playing in Chicago bands through the 1920`s his main job was managing Okeh Records race records division. With his own studio band Richard Jones And His Jazz Wizards & as a pianist he backed many singers & bands. Composing such jazz standards as "Trouble In Mind" & "Riverside Blues", he remained active until his death as a musician & talent scout. - born 13 June, 1889 in Donaldville, Louisiana, USA - died 8 December, 1945 in Chicago, Illinois, USA.

Put Me in the Alley Blues on Really the Blues?: A Blues History, Vol. 1 by Various Artists, James Reese Europe & Paul Whiteman

29th and Dearbom on Good Stuff by Richard M. Jones & his Jazz Wizards

All Night Shags on Good Stuff by Richard M. Jones & his Jazz Wizards