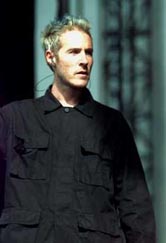 Robert Del Naja (/ˈrɒbə(r)t dɛl ˈnaeea/; born 21 January 1965), also known as 3D, is an English artist, musician, singer and songwriter. He emerged as a graffiti artist and member of the Bristol collective known as "The Wild Bunch", and later as a founding member of the band Massive Attack, with whom he is still active.

Godless - Massive Attack Mix on Godless by The Dandy Warhols