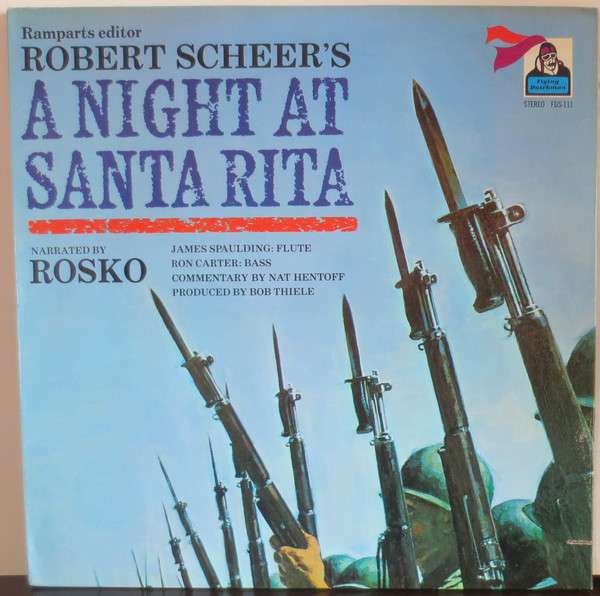 ROBERT SCHEER A Night At Santa Rita Flying Dutchman FDS-111 (stereo) Spend one night in jail with Ramparts editor Robert Scheer for protesting the destruction of People's Park in Berkeley California in 1969. Governor Ronald Reagan, everyman's compassionate conservative, called Berkeley "a haven for Communist sympathizers, protestors, and sex deviants." Yeah? So? That's all legal! One died that day in May, many were jailed. Here is a piece of the story. Music accompaniment features flute by James Spaulding and bass by Ron Carter. ********************** A crucial piece of 60s history By mark in ann arbor on May 15, 2014 In 1969, locals had claimed a vacant lot owned by the University of California and transformed it into a park, unofficially dubbed "People's Park." In the early morning hours of May 15, 1969, police claimed the park as university property, uprooting trees the locals had planted and surrounding the area with a chain-link fence to keep "trespassers out." By noon, a crowd of 6,000 people had gathered, demanding access to the park. In the resulting confrontation, one Berkeley resident, James Rector, who was watching the activities from a nearby roof, was shot and killed, and hundreds were arrested, including Robert Scheer, and editor at Ramparts magazine. His account of his nearly 24 hours in detention provides the text, read with dramatic flair by NYC radio personality Rosko, accompanied by the haunting flute of James Spaulding and bass of Ron Carter. Granted, this album is probably of very little interest to anyone but a few baby boomers and students of 60s history. But for anyone who wants a clear picture of what it was like to be arrested at a 60s protest, this album paints a stark portrait of the inside of Santa Rita prison--the brutality, the hatred and contempt the guards had for the young protesters, and the terror they induced. A great find.