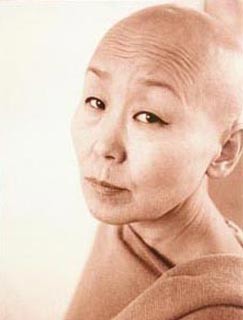 Sainkho Namtchylak (1957, Tuva, Russia) is a singer. She was born in one of small villages, situated among numerous gold fiels, in the Republic of Tuva (South Siberia, Russia). Her ancestors were nomads, and her parents worked as school teachers. She studied at the musical college, but later was expelled as uncapable in the field. She continued her education in Moscow, where she moved in order to finish college. Namtchylak later graduated from Gnesinsky Institute in Moscow, majoring in Vocal. While studying at the institute, she mastered various vocal techniques of traditional throat vocal, and principles of the overtone music. Her professional career of a vocalist Namtchylak started as a folk singer in the Tuva State Folk Ensemble Sayani, being a member of which she went on tours about various countries in Europe, and also in the USA, Canada, Australia and New Zealand. In 1989 she started collaborating with Russian representatives of new jazz and experimental music. Her first concert tour in the new capacity took place in 1990, when Namtchylak besides performing in Ulrichsberg, participated in the festival of new music in Muenster. …This autumn European jazz magazines called her discovery of the festival season” with a lot of prasing… That was a success… The singer’s unique manner, combining ancient throat vocal techniques and the modern techniques of sound production, joining tradition and avant-garde, allows the listeners to plunge into the most up-to-date area of musical environment (N. Dmitriev, director of the Cultural Center Dom, Moscow). After the festival in Muenster Namtchylak repeatedly performed as a member of the Tri O(jointly with S. Letov, A. Kiritschenko, A. Alexandrov), and also with representatives of the European music – Peter Kowald, Butch Morris, W. Luedi, S. Murray, Ned Rottenberg, Evan Parker and others. She has produced 27 musical releases, both solo and group, at various recording studios, including such as: FMP (Germany), Leo Records (Great Britain), FIN Records (Japan) and others. Among her albums are the following ones: Lost Rivers (FMP, 1992), When the Sun is Out You Don’t See Stars (FMP, 1992), Letters (Leo Records, 1993), Out of Tuva (Gramworld, 1993), Live (Free Improvisation Network Record, 1993), Amulet (Leo Records, 1996), Mars Song (Victo, 1996), Time Out (AnySai Records, 1997), Naked Spirit (Animata Records, 1998), Aura (EniSai Records, 1999), Stepmother City (Ponderosa, 2000) and others. Namtchylak participated in numerous festivals of experimental music in Germany, Switzerland, Denmark, Holland, France, Italy, USA, Japan and many others, and also in Russia, performing jointly with such musicians as M. Zhukov, V. Rezitsky, the groups Tri O, Arkhangelsk and Moscow Composers Orchestra, with which she recorded 4 CDs: Life At City Garden (U-Sound, 1995), An Italian Love Affair (Leo Lab Records, 1996), Let Poremsky Dream (Leo Lab Records, 1997), The Gift (Long Arms Records, 1997). Sainkho Namtchylak lives and works in Vienna (Austria) and Moscow (Russia).

From Me to You on Naked Spirit by Sainkho

Place I an Born on Go to Tuva by Sainkho & Garlo

Valley of Shadows on Naked Spirit by Sainkho