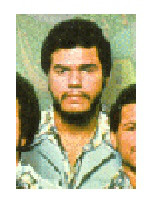 b, US, Miami
Musician of Latin
A.k.a. Salvador Cuevas

Bronx, NY born bassist, Salvador (Sal) Cuevas played with Latin outfit Tipica '73. They split due to economical factors but also for musical differences, with the disjunctive of remaining tipico or going progressive. Out of this Cuevas moved on to Los Kimbos. Curiously, although the Kimbos forming crew (Orestes Vilato, Adalberto Santiago, Joe Manozzi - trumpeter on Tipica, now shifting to piano - and Nelson Gonzalez) wanted to remain in the tipico sound of Tipica'73's first two albums, for this new album they also shifted, although momentarily, to modern ground, as virtuoso bassist Sal Cuevas actually is playing a Fender bass for most of the album. During the late 70's and early 80's Cuevas had a great berth with Willie Colón - one of the giants of modern salsa, a popular trombonist, and bandleader since the late 1960's. Sal played unusually far-forward -- his funk-inspired slapping giving a distinctive flavor to songs like Casanova, Juanito Alimaña, and Tiempo Pa' Matar. Since then, he has played with Ray Barretto, Mongo Santamaria and a Kip Hanrahan project putting music to the texts of Ishmael Reed in 1985. Along with Ite Jerez, Cuevas featured in Tito Puente's band. Most recently Cuevas appeared on albums by two quite different Latin greats - Gloria Estefan's Latin albums "Abriendo Puertas" and "Alma Caribeña", and in 1998 the legendary Celia Cruz's album. Died May 9, 2017