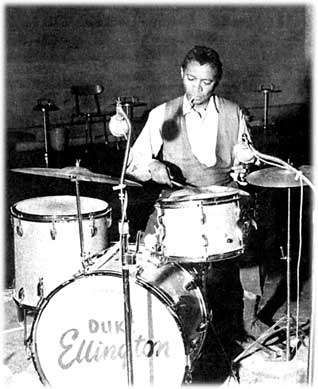 Sam Woodyard (January 7, 1925, Elizabeth, New Jersey - September 20, 1988, Paris, France) was an American jazz drummer.Woodyard was largely an autodidact on drums, and played locally in the Newark, New Jersey area in the 1940s. He gigged with Paul Gayten in an R&B group, and then played in the early 1950s with Joe Holiday, Roy Eldridge, and Milt Buckner. In 1955, he joined Duke Ellington's orchestra, and remained the ensemble's drummer until 1966.