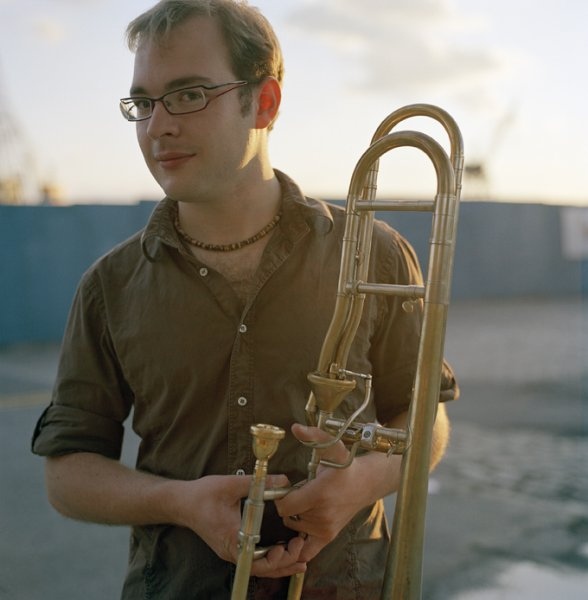 At a time when there are more musicians in the world trying to be heard than ever before, rare gems like Samuel Blaser seem, paradoxically, to rise above it all. With As the Sea, Blaser's follow-up to his 2011 Hatology debut Boundless and featuring the same multinational, transatlantic quartet - French guitarist Marc Ducret, Swiss bassist Bänz Oester and American drummer Gerald Cleaver - he's already achieved a rare prominence as one of his generation's most wildly elegant, relentlessly forward-thinking and undeniably virtuosic trombonists. Since his 2007 debut as a leader, 7th Heaven (Between the Lines), Blaser has grown at an almost incomprehensible rate, from straight-ahead hard bopper in his mid-twenties to innovative free player and ever-searching composer and bandleader in his early thirties, one whose improvisational strength has received praise from sources like Audiophile Audition, citing Blaser's music as occupying "ambient/free jazz terrain that has a depth of vision and clarity revealing musical maturity beyond Blaser's nearly three decades of life." Born and raised in La Chaux-de-Fonds, Switzerland - a lesser-known but no less significant jazz metropolis which was, for a time, home to expatriate Americans Sidney Bechet and Kenny Clarke, as well as Swiss jazz trombonist Raymond Droz - Blaser has also spent considerable time living in New York City and currently resides in Berlin; truly an international musician, then, in clear defiance of boundaries cultural, musical and stylistic. Beginning trombone lessons at the age of 9, he "couldn't go past third position and had to have a trolley to carry trombone because it was too heavy," says Blaser. Still, with plenty of music in the Blaser household, where he was the middle of three children - ranging from Swiss folk music to American R&B and jazz - Blaser progressed quickly, entering the local conservatory at 14 and graduating seven years later in 2002 after receiving a number of awards in both the jazz and classical spheres, including the 2000 Benny Golson Prize. Continuing private studies, Blaser began a number of significant associations, including the heralded Vienna Art Orchestra and European Radio Big Band, leading to a Fullbright scholarship which enabled him to study in the United States at the Purchase College Conservatory of Music, going on to win the J.J. Johnson Prize, as well as both the Public Prize and Jury's Favorite Player awards at the 2006 Fribourg Jazz Festival. All of these diverse accomplishments have ultimately - and inevitably - led to Blaser finding a personal nexus where disparate elements like Indian Tihi and Wagnerian opera meet. Blaser's impressive improvisational élan is predicated on instrumental mastery that is nothing more than the means to very musical ends. Together with his equally unfettered quartet, Blaser continues to expand the purview of jazz, redefining it in the new millennium as it enters its second century of existence. Beyond Blaser's ability to combine knotty compositional form with incendiary improvisational prowess in the context of his own music, his unfettered yet ever-collaborative approach has resulted in a number of significant associations, amongst them his ongoing work with Swiss percussion legend Pierre Favre; a much-lauded duo with pianist Malcolm Braff; touring in 2012 as a member of François Houle's recent 5+1 group, and heard on the French Canadian clarinetist's Genera (Songlines, 2012); and recording/performing with Berlin-based Canadian saxophonist Peter van Huffel's HuffLiGNoN group with singer Sophie Tassignon. Blaser has also shared the stage with artists including trombonist David Taylor, and pianists Renee Rosnes and Hal Galper. It's no surprise that Rene Laanen of USA Trombone Online has called Blaser" one of today´s finest trombonists." 2013 will see Blaser touring with two new trios: one that, in addition to Marc Ducret, will also feature Danish drummer Peter Bruun; and another featuring French pianist Benôit Delbecq and American drummer Gerry Hemmingway. Equally important, Blaser will also reunite his Consort in Motion (Kind of Blue, 2011) Quartet with pianist Russ Lossing, bassist Drew Gress and Hemmingway, who replaces the sadly deceased Paul Motian. That record - Blaser's first and only to include a pianist, marrying the seemingly disparate elements of Renaissance and Baroque period composition with more open-ended jazz improvisation - was praised by All About Jazz's Troy Collins as " Fearlessly modern, yet respectfully regal." Collins continues, asserting that "Blaser's adventurous arrangements and reinterpretations offer the best of both worlds, enriching the raw impetuousness of avant-garde jazz with the proven sophistication of ageless classical forms. Consort in Motion is a high-water mark in the enduring lineage of the Third Stream, and all the more inspiring for the focus of its vision." Meanwhile, with the release of As the Sea - like Boundless, a live recording but one culled from a single performance - Blaser reaps the rewards of greater trust and personal camaraderie built with Ducret, Oester and Cleaver through additional touring, following the release of their debut recording. "The music is quite different from the first record," says Blaser, "because things are more written. It's a little more complex rhythmically, too. But it's crazy, because I can play anything - a single note, even - and everybody will move with me. It's pretty intense." Between recording and touring with his own groups and collaborating in other leaders' ensembles, Blaser's career continues an upward trajectory that seems to have no end in sight. "The world of music fascinates me to no end, and I´m determined to take one journey after another with my instrument and work," says Blaser. "It´s all about discovery and communicating new ideas. Believe me, I´m proof that a shiny trombone can send a message right to your heart and change your life."

The Beekeeper on Voyageurs by Samuel Blaser & Marc Ducret

Early in the Mornin' on Moods by Samuel Blaser, Gerry Hemingway & Marc Ducret