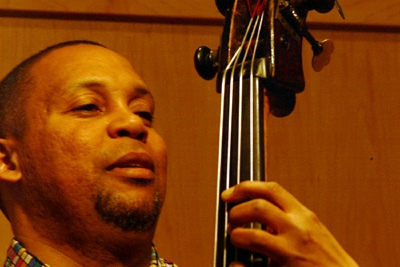 Santi Wilson Debriano (born 1955 in Panama) is a jazz bassist.Debriano was raised in Brooklyn, having moved there with his family at age four. He studied composition at Union College in New York, then attended the New England Conservatory of Music and Wesleyan University. He worked with Archie Shepp in the late 1970s and early 1980s, then moved to Paris and played with Sam Rivers for three years. He returned to New York City and has since worked with Don Pullen, Pharoah Sanders, Sonny Fortune, Billy Hart, Larry Coryell, Chucho Valdés, Hank Jones, Cecil Taylor, Randy Weston, Freddie Hubbard, Kirk Lightsey, and Attila Zoller.