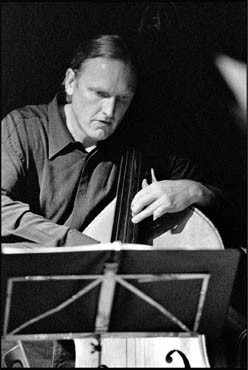 Scott Walton has performed with George Lewis, Wadada Leo Smith, John Carter, Vinny Golia, Bobby Bradford, Nels Cline, Quincy Troupe, Ray Anderson, Toshiko Akiyoshi, Clifford Jordan, and Al Cohn, among others. He has collaborated with poets, dancers, performance artists, and filmmakers. Current projects as a bassist in addition to Cosmologic include the Vinny Golia Quintet, the Rain Trio (with Alex Cline and Eric Barber), and ongoing work with Harris Eisenstadt, Erik Griswold, and Jason Stanyek. As a pianist he has commissioned and premiered works by numerous composers (David Lipten, most recently), has toured with the Octagon Ensemble, and has collaborated in interactive computer and multimedia performances with Vibeke Sorenson and Harry Castle. He is currently performing music of Henry Cowell, and an improvised interpretation of Charles Ives' Concord Sonata. Walton is featured on recent CD releases by the Vinny Golia Quintet (One, Three, Two), O'Keefe, Stanyek, Walton, Whitehead (Tunnel), Nathan Hubbard (Skeleton Key Orchestra), Jeff Kaiser (17 Themes for Ockodektet), Chris Chafe (Arcology), and Anthony Davis (Tania). He has recorded on the Soul Note, Nine Winds, JazzHalo, Circumvention, pfMentum, Koch, Innova, Centaur, Albany, and Revelation labels. He is a member of the San Diego based Trummerflora Collective.

You Can Finally See on Wandering Soul by Scott Walton

The Chosen One on Wandering Soul by Scott Walton

Say You Will on Wandering Soul by Scott Walton

Believe in You on Wandering Soul by Scott Walton

World Etched in Stone on Wandering Soul by Scott Walton

Save Me from Myself on Wandering Soul by Scott Walton