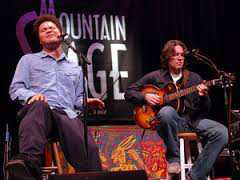 Mike Mattison and Paul Olsen are Scrapomatic, also known to their diehard fans as "The Great American Music Machine." The duo pour their influences in the top and out come perfectly calibrated Americana gems. Scrapomatic have recorded three critically acclaimed blues-roots albums since 2002 -- "Scrapomatic," "Alligator Love Cry" and 2008's "Sidewalk Caesars," which they are currently supporting on a nationwide tour. Their mission: Make music rooted to the blues canon, but dodge becoming a museum piece by taking up the flag of the modern blues innovators -- Taj Mahal, Nina Simone, Dr. John; artists who used their deep-seeded knowledge of the genre to push it into the future. Needless to say, the Great American Music Machine is not afraid of its influences.

Killing Yourself On Purpose on Sidewalk Caesars by Scrapomatic

The Long Way Home on Alligator Love Cry by Scrapomatic

Alligator Love Cry on I'm A Stranger by Scrapomatic

Hook, Line and Sinker on Sidewalk Caesars by Scrapomatic

He Called My Name on Sidewalk Caesars by Scrapomatic

So Much Love on Alligator Love Cry by Scrapomatic