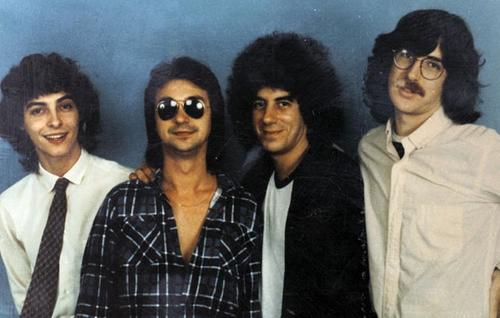 Serú Girán was an Argentine rock supergroup. Formed in 1978, the group consisted of Charly García (keyboards, synthesizers and vocals), David Lebón (guitars and vocals), Pedro Aznar (electric and fretless bass and vocals), and Oscar Moro (drums and percussion). It is considered one of the best in the history of Rock en Español, both musically, and conceptually and staging. It is also renowned for the virtuosity of its musicians. Serú Girán was born after the separation of the band La Máquina De Hacer Pájaros which Charly García had organized in his early post-Sui Generis (4). Along with David Lebón, Charly García traveled to Búzios (Brazil) in 1978, with the idea of writing songs for a new album. On their return to Buenos Aires, García met the young and talented bass player Pedro Aznar. They were then joined by Oscar Moro, who was the drummer of La Máquina de Hacer Pájaros and formerly of the legendary group Los Gatos. "Billy Bond And The Jets" was formed by Charly García, Billy Bond, David Lebón, Pedro Aznar and Oscar Moro. They released a single disc with tracks like "Discoshock", "Toda la Gente", and "Loco, ¿No te sobra una moneda?". Finally Billy Bond (2) dismantled the project, and the rest of its members formed Serú Girán. The beginnings of the band were difficult. Its first album, Serú Girán (released in 1978), did not have a good reception even though some of its songs (notably "Seminare" and "Eiti Leda") would become public anthems. The first public appearance of the band was in a boat over the Riachuelo. What inspired García to do this was the revolutionary band "Los Jóvenes de Ayer". In its debut, the band was joined by the orchestral collaborations of Daniel Goldberg, who recorded with 24 musicians in USA. The official presentation of the debut album Serú Girán was held in Estadio Obras Sanitarias on November 3 in 1978 with an orchestra of 24 musicians (string section and wind) and closed circuit television. In the back of the stage, a giant screen showing addressing the musicians on stage. Lebón, Aznar and Moro were dressed in white, while Charly chose a jacket, a black mesh bag and snickers. The beginning of the recital, with the full orchestra playing the powerful intro of the song "Serú Girán", presaged an unforgettable night. However, it did not go well. The audience didn't get the satire behind the song "Discoshock", which is about the disco music in vogue at the time, and was taken aback. Amid a chorus of whistles, the crowd asked the musicians to play "Blues del levante", a song written by García at the end of his Sui Generis tenure. The rest of the concert went to general indifference.

Viernes 3 AM on Rock Nacional by Various Artists