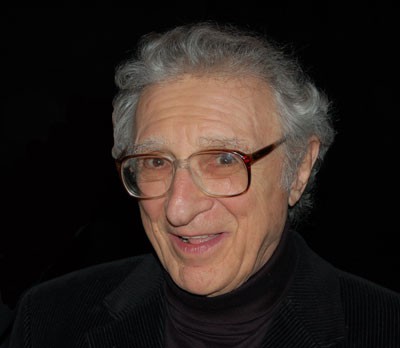 American lyricist best known for his collaborations with composer Jerry Bock on hit musicals such as Fiddler on the Roof (born 30 April 1924). Born and raised in Chicago, Sheldon Harnick began studying the violin while in grammar school. After serving in the U.S. Army for three years, he enrolled in the Northwestern University School of Music, and earned a Bachelor of Music degree in 1949. Though his focus had been the violin, Harnick also developed skills as a writer of comedy sketches, songs and parody lyrics, and eventually decided to try his luck as a theatrical lyricist in New York City. His first song in a Broadway show, "The Boston Beguine" for New Faces of 1952, introduced theatergoers to the wry, subtle humor and deft wordplay indicative of a Harnick lyric. Over the next several years he contributed lyrics or whole songs to such vintage revues as John Murray Anderson's Almanac, The Shoestring Revue and The Littlest Revue. A few more years were spent working on other writers' trouble-plagued Broadway-bound musicals before Harnick joined up with composer Jerry Bock to write their own musicals. While the first Bock & Harnick musical, The Body Beautiful in 1958 showed promise, it was their second musical, FIORELLO! in 1959, that put the team on the map. Their musical biography of New York City's legendary mayor earned the Tony Award, Pulitzer Prize and New York Drama Critics' Circle Award. Their next musical, TENDERLOIN (1960), set in the seamy Tenderloin district of late 19th century New York, was followed by SHE LOVES ME (1963), which beguiled audiences with its Central European charm and operetta elegance. In 1964 Bock & Harnick, working with director-choreographer Jerome Robbins and book writer Joseph Stein, created a musical masterpiece that vividly evoked a vanished community while telling a story with universal and timeless appeal. FIDDLER ON THE ROOF, based on a series of short stories by Jewish folklorist Sholom Alecheim, earned the Tony Award, New York Drama Critics' Circle Award, a gold record (for both its Broadway cast album and film soundtrack recordings) and a platinum record (for the Broadway album). In 1971, with the Broadway production still running, United Artists released the film version starring Topol. The following year the stage production became the longest-running show in Broadway history, a record it held until 1979. After FIDDLER, the Bock & Harnick collaboration went on to include such versatile fare as THE APPLE TREE (1966), which was comprised of three one-act musicals. This was followed by THE ROTHSCHILDS in 1970, an epic telling of the founding of the Rothschild banking dynasty. Harnick's other collaborators in musical theatre have included: Michel Legrand, for whom Harnick translated The Umbrellas of Cherbourg in 1979 before working together on a musical of A Christmas Carol in 1981; Mary Rodgers, with whom Harnick wrote a version of Pinnochio in 1973 for the famed Bil Baird Marionettes, and a song, "William's Doll," for Marlo Thomas' Free to Be...You and Me in 1974; Richard Rodgers, joining forces for the score to Rex in 1976, a Broadway musical about Henry VIII; and Joe Raposo, where their joint credits included Sutter's Gold (1980), a cantata premiered by the Boston Symphony Orchestra, and A Wonderful Life (1986), a musical based on Frank Capra's holiday classic. A solo work, Dragons in 1984, was based on a Russian play and given its premiere at Harnick's alma mater, Northwestern University. Harnick has provided English-language librettos for classical operas and oratorios, including works by Stravinsky, Ravel, Mozart, Bach and Verdi. His version of Lehar's The Merry Widow (1977) was premiered by the San Diego Opera Company starring Beverly Sills (a subsequent album won the 1979 Grammy Award for best new opera recording). His translation of Georges Bizet's Carmen was commissioned and premiered by the Houston Grand Opera in 1981 and served as the English text for Peter Brooks' acclaimed La Tragedie De Carmen in 1984. His translation of several Yiddish songs were featured in the Los Angeles and New York productions of Joshua Sobol's play Ghetto in 1986 and he collaborated on the English libretto for the Broadway production of the Dutch musical Cyrano in 1993. His original opera librettos include Captain Jinks of the Horse Marines (1975), music by Jack Beeson; Love in Two Countries (1991), music by Thomas A. Shepard; and The Phantom Tollbooth (1995), music by Arnold Black and based on Norton Juster's popular children's book. His work for television and film ranges from songs for the HBO animated film, The Tale of Peter Rabbit (1991) with music by Stephen Lawrence, to lyrics for the opening number of the 1988 Academy Awards telecast. He wrote the theme songs for two films, both with music by Cy Coleman: The Heartbreak Kid (1972) and Blame it On Rio (1984). Sheldon Harnick is a member of The Dramatists Guild and the Songwriters Guild of America. In addition to his Tonys, Pulitzer and Grammys, his many other honors include: The Johnny Mercer Award presented by the Songwriters Hall of Fame, the Marc Blizstein Memorial Award for achievement in the creation of opera librettos, presented by the American Academy and Institute of Arts and Letters, and Honorary Doctorates of Humane Letters awarded by Illinois Wesleyan University, and Muskingum College.

Good Morning, Good Day on She Loves Me by Jerry Bock & Sheldon Harnick

Try Me on She Loves Me by Jerry Bock & Sheldon Harnick

Ilona on She Loves Me by Jerry Bock & Sheldon Harnick

Dear Friend on She Loves Me by Jerry Bock & Sheldon Harnick