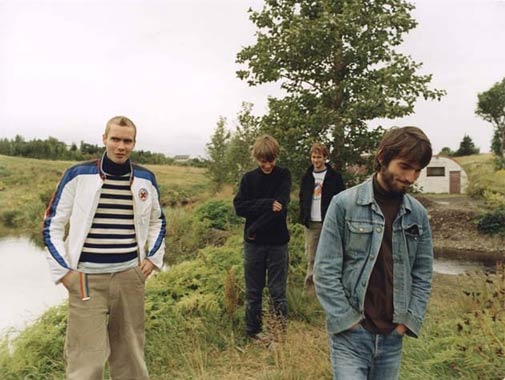 Icelandic post-rock band from Reykjavík. Known for their ethereal sound, frontman Jónsi's falsetto vocals, and the use of bowed guitar, the band's music is also noticeable for its incorporation of classical and minimalist aesthetic elements. The name "Sigur Rós" is Icelandic for "Victory Rose". The band is named after Jónsi's newborn sister Sigurrós Elín. Jón Þór "Jónsi" Birgisson (guitar and vocals), Georg Hólm (bass) and Ágúst Ævar Gunnarsson (drums) formed the group in Reykjavík in January 1994. Ágúst Ævar Gunnarsson retired after the release of the second album to be replaced by Orri Páll Dýrason. The band was joined by Kjartan Sveinsson on keyboards in 1998. Kjartan Sveinsson left the band in 2013. Orri Páll Dýrason left the band in 2018 facing allegations of sexual assult writing “I cannot have these serious allegations influence the band and the important and beautiful work that has been done there for the last years.” Line-up (As of Oct. 2018): Jón Þór Birgisson (guitar, vocals), Georg Hólm (bass guitar)

Hoppípolla on Takk... by Sigur Rós

Untitled #3 - Samskeyti on by Sigur Rós

Glósóli on Takk... by Sigur Rós

Untitled #4 - Njósnavélin on by Sigur Rós

Sæglópur on Takk... by Sigur Rós

Untitled #1 - Vaka on by Sigur Rós