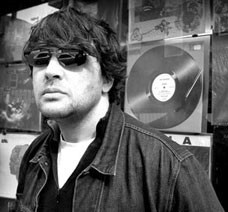 A co-founder of Sheffield-based Chakk and FON Studios; the first professional 24-track recording studio and set up FON Records in Sheffield - which worked with internationally-known record producers including Sly and Robbie, and Richard Burgess. FON's recording clients included Boy George, Pop Will Eat Itself, Yazz, Erasure, Take That, The Spice Girls, 808 State, Lulu, Tom Baker, Moloko and Pulp. At FON they started working with fledging digital recording techniques, including investment in Apple-based Greengate sampling software. Sim was involved with the build and installation of two early recording studio projects in Sheffield - Human League and Comsat Angels / Axis. A highly regarded saxophonist Lister has also worked as a producer and musical director with Factory Records in Brazil, the USA and the UK. Lister also plays and records trumpet and French horn as well as using wide-ranging digital techniques. Tours and performances as theatre musician included two full seasons at the Edinburgh Festival Fringe with Sheffield-based Compass Theatre. In the 1980s Sim gave music workshops at the 'Leadmill' arts venue in Sheffield as part of the arts organisation ‘Manifesto’ - one of his students was comedian, Linda Smith. Lister's sessions have included Boy George, Funky Worm, Cabaret Voltaire, Ashley and Jackson, Subsonic Two and Guy Barker - and TV appearances have included Top of the Pops and the Tube. As a composer he was jointly commissioned to compose a piece for Phoenix Dance Theatre in Leeds. Sim Lister's most recent releases are Two Thousand and Six (2005) by Heights of Abraham (a collaboration with Steve Cobby and Jake Harries - and in 2006 Put Me on A Planet by J*S*T*A*R*S (with Steve Cobby). Nowadays he is also label boss of Twentythree Records, the label of Fila Brazillia and Steel Tiger Records; home to J*S*T*A*R*S and The Cutler.