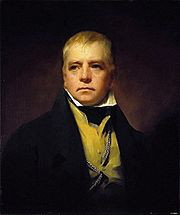 Sir Walter Scott, 1st Baronet, FRSE (15 August 1771 – 21 September 1832) was a Scottish historical novelist, playwright and poet with many contemporary readers in Europe, Australia, and North America.Scott's novels and poetry are still read, and many of his works remain classics of both English-language literature and of Scottish literature. Famous titles include Ivanhoe, Rob Roy, Old Mortality, The Lady of the Lake, Waverley, The Heart of Midlothian and The Bride of Lammermoor.

Settings of Scottish Songs for Thompson, S. 169: Jock o’ Hazeldean on Wisps in the Dell by Makaris