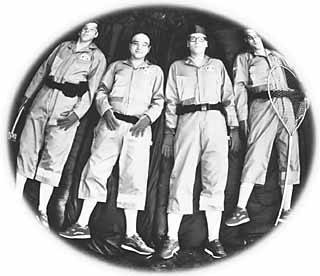 Soul Coughing was an American alternative rock band. Based in New York City, the band found modest mainstream success during the mid-to-late 1990s. Soul Coughing developed a devout fanbase and have garnered largely positive response from critics. Steve Huey in AllMusic describes the band as "one of the most unusual cult bands of the 1990s...driven by frontman Mike Doughty's stream-of-consciousness poetry, Soul Coughing's sound was a willfully idiosyncratic mix of improvisational jazz grooves, oddball samples, hip-hop, electronics, and noisy experimentalism (described by Doughty as 'deep slacker jazz')." The inventive sampling and keyboard artistry of Mark Degli Antoni undergirded the band's distinct sound.

Is Chicago, Is Not Chicago on Ruby Vroom by Soul Coughing

True Dreams of Wichita on Ruby Vroom by Soul Coughing

The Idiot Kings on Irresistible Bliss by Soul Coughing

Bus to Beelzebub on Ruby Vroom by Soul Coughing