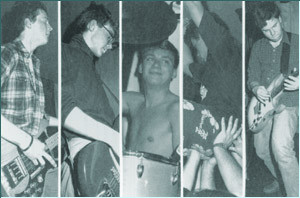 Squirrel Bait was a punk rock band formed in the early 1980's in Louisville, KY, by guitarist David Grubbs and bassist Clark Johnson. The group's first demo tape, released under the name Squirrelbait Youth, featured drummer Rich Schuler and saw Grubbs handle both guitar and vocals. The group's second demo featured drummer Britt Walford and vocalist Peter Searcy and saw the group move away from the hardcore sounds of the first demo. 1985's self-titled EP received much critical accalim and saw Ben Daughtry take over the drums while Brian McMahan join as second guitarist (two of the EP's tracks, which feature Walford on drums, were taken directly from the band's second demo). The same line-up recorded the band's only LP, 1987's "Skag Heaven". The group broke up after its release, with the split owing as much to personal and musical differences within the band as it did to Johnson and Grubbs' decision to leave Louisville for college. Grubbs and Johnson would reunite in Bastro while McMahan and Walford, who, while never in Squirrel Bait at the same time, had played together in various bands since grade school, went on to form Slint. In the mid 1990s, Grubbs reissued the self-titled EP and "Skag Heaven" on his short-lived Dexter's Cigar imprint.