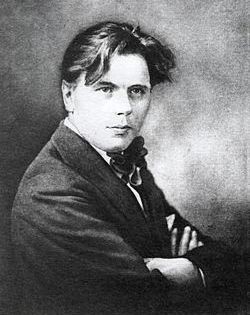 Stasys Šimkus (23 January 1887, Motiškiai, now in Jurbarkas district municipality – 15 October 1943, Kaunas) was a Lithuanian composer.Šimkus studied in Vilnius and Warsaw and later became the pupil of Anatoly Konstantinovich Lyadov, Jāzeps Vītols, and Maximilian Steinberg. After visiting the United States, he went to Leipzig for further studies with Paul Graener and Sigfrid Karg-Elert. A national Romantic, Šimkus helped resurrect the Lithuanian cultural organization Daina in 1916. In 1923, he opened a private music school in Klaipėda, which was soon converted into the national Lithuanian conservatory (now called the Klaipėda Stasys Šimkus Conservatoire). He was a professor of composition at the Conservatoire from 1931 to 1937 and also conducted the State Opera at Kaunas.