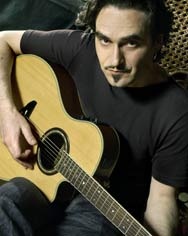 Stephan Eicher (Born 17 August 1960) is a Swiss singer. He is of Alsatian mother and Yeniche father, also a musician.His songs are sung in a variety of languages, including French, German, English, Italian, Swiss-German, and Romanche. Sometimes he even uses different languages in the same piece.His success started in German-speaking countries in the 1980s when as part of the band Grauzone he had a hit single "Eisbär". With hit songs such as "Combien de Temps" and "Oh Ironie", his popularity spread Europe-wide with various albums, tours, and chart success in France and Switzerland.