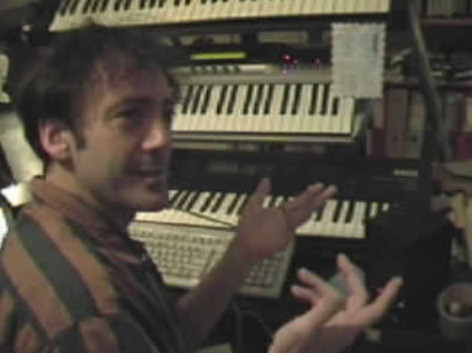 Composer and music producer. Stephen Ferguson, whose creativity is embedded in the technology of our time, has been called a composer of “undeniable originality” (Peter Niklas Wilson, Neue Zeitschrift für Musik). The British composer, who hails from Glasgow, has written for classical instruments and is a film composer as well as an internet and computer musician. Ferguson studied piano performance (London), musicology (D. Phil. Vienna) and has a masters in music analysis. He has composed commissioned works for patrons such as the Edinburgh Festival, Ars Electronica, the Salzburg Festival, WDR, BBC, Kings Lynn Festival, Musikverein Vienna, ORF or the styrian autumn, as well as for performers such as the Arditti String Quartet. Between 1992 and 1996 Ferguson was assistant to György Ligeti and editor of the Schott Ligeti Edition. He participated in Ligeti’s projects with Pierre Boulez, Salonen, the London Philharmonic, Ensemble Modern and Stanley Kubrick. His book on Ligeti’s piano music was called by the Ligeti “the best analysis of my music I have ever read”. Stephen Ferguson was invited by John Chowning to become a visiting scholar at Stanford Unversity and he has been a guest lecturer in the United States and in the UK, for example at Oxford University. As a university teacher he produced student works that were broadcast in the leading German radio stations, Ö1, WDR, NDR, BR and SFB. In the field of film composition the spectrum of his scores spans from avantgarde filmmaker Valie Export to Fritz Lang. His work in film has brought him together with musicians such as Angus Thomas (the bassist of Miles Davis), Bubba Bryant (of George Benson) and Jon Sass (Pink Floyd). Ferguson was invited by leading firms to create music for their corporate design, whether Daimler-Benz, Audi, Saab (all world-wide), or Siemens and VW. Stephen Ferguson is the founder of the aAmplify project, new music for the internet, with productions by 16 composers, which can be visited at www.amplify.at. As an experienced producer for CD, DVD and WWW he runs his own 90m_ recording studio with a large Pro Tools system and equipment by Neve, Tube Tech, Symetrix, Neumann etc. Stephen Ferguson, who alternates between his homes in Vienna and Berlin, is the recipient of many prizes for composition. For his creative work he was awarded the honorary citizenship of the Republic of Austria. 2007 for Music Adventure Factory