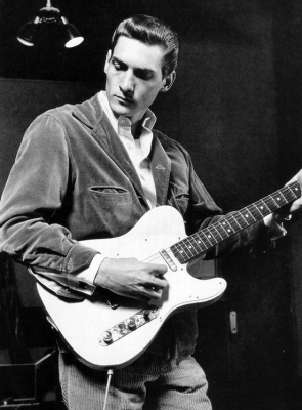 American guitarist, songwriter, arranger and producer, born 21 October 1941 near Dora, Missouri. Founding member of both The Mar-Keys (originally named The Royal Spades) in the late 1950s, and Stax' in-house band Booker T & The MG's in the early 1960s. Was succesfully active for the label as an A&R manager, musician, one-time solo artist, engineer, producer and songwriter, co-writing classic songs such as Knock On Wood, The Dock Of The Bay and In the Midnight Hour. He left Booker T & The MG's and the label in 1970, to embark on a career as a session musician and producer, working with artists like Jeff Beck, Tower Of Power and Ringo Starr. In the 1980s he recorded two more solo albums. Cropper is also an original member of The Blues Brothers Band. In the early 70s he belongs to the stuff of Clover Recorders.

Thirty Second Lover on Dedicated: A Salute To The 5 Royales by Steve Cropper

What'd I Say on Jammed Together by Steve Cropper, Pop Staples & Albert King

Far Away on Fire It Up by Steve Cropper

Baby, What You Want Me To Do on Jammed Together by Steve Cropper, Pop Staples & Albert King

Don't Turn Your Heater Down on Jammed Together by Steve Cropper, Pop Staples & Albert King