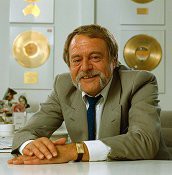 Born: 25 January 1931 in Mariestad, Sweden Dead: 12 September 1997 in Stockholm, Sweden Stig "Stikkan" Anderson professionally worked as producer, songwriter, publisher, artist manager and record executive. Best known as ABBA's manager during the 1970s and 1980s, and sometimes referred to, in the press as the fifth member of the group. He founded several record labels such as Polar in 1963 and Anderson Records in the mid-1990s. His ingenious idea to shop ABBA around the world, to get the best deal, resulted in signing the group to many different record labels. Not a common practice with most music acts. As a songwriter, he also translated many popular English language songs into Swedish, some for the artists signed to his Polar label. Stig ”Stikkan” Anderson was also the founder of the Polar Music Prize in 1989.