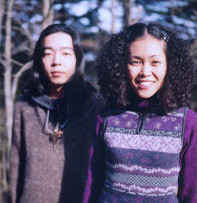 Sugar Plant is a Japanese indie rock band. Unlike most rock music, their music is generally very slow, mellow and melodic, in the vein of similar American "slowcore" groups such as Galaxie 500, Bedhead, or Low, but more optimistic in tone than the latter band. Many songs begin by sounding like lullabies but often build very gradually to a great intensity through the duration of the song. The band consists of vocalist Chinatsu Shoyama and guitarist Shin'ichi Ogawa; the band also usually includes a keyboardist and drummer, these roles being filled by a changing roster of musicians. Chinatsu and Shin'ichi formed the band in 1993, while they were studying at university. The band's name comes from a sugar factory in Kawasaki, Kanagawa. Sugar Plant has released recordings on the Pop Narcotic, Pony Canyon, and World Domination Recordings labels. (source:Wikipedia)