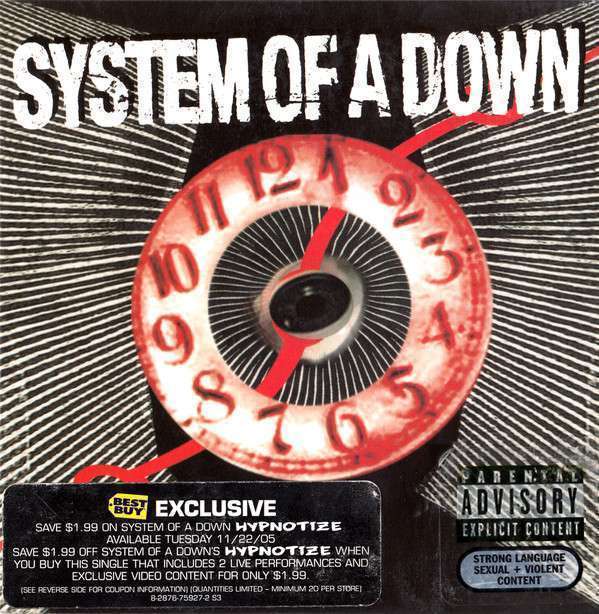 System Of A Down
Hypnotize Value Added

"Best Buy Exclusive - Only available from Best Buy stores before the album Hypnotize was released." "Save $1.99 on System Of A Down Hypnotize available Tuesday 11/22/05 - Save $1.99 off System Of A Down's when you buy this single that includes 2 live performances and exclusive video content for only $1.99. (See reverse side for coupon information) (Quantities limited - minimum 20 per store) 8-2876-75927-2 S3" Tracks 1 & 2 recorded live at the 'Big Day Out' for Triple J's Live At The Wireless. Mixed January 2005, Sydney, Australia Track 3 recorded live at the Hurricane Festival in Scheesel, Germany on June 11, 2005 Video is 400x225 and in .mov format. All songs published by Sony/ATV Songs LLC (BMI), Malakian Publishing (BMI), Stunning Suppository Sounds (BMI), Shattered Mirrors Publishing (BMI), Dolmayan Publishing (BMI) © 2005 Sony BMG Music Entertainment / ℗ 2005 Sony BMG Music Entertainment