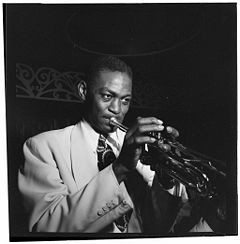 Taft Jordan (February 15, 1915, Florence, South Carolina – December 1, 1981, New Orleans) was an American jazz trumpeter, heavily influenced by Louis Armstrong.Jordan played early in his career with the Washboard Rhythm Kings before joining Chick Webb's orchestra from 1933 to 1942, remaining there after Ella Fitzgerald became its frontwoman. Jordan and Bobby Stark traded duties as the main trumpet soloist in Webb's orchestra. From 1943 to 1947 he played with Duke Ellington, then with Lucille Dixon at the Savannah Club in New York City from 1949 to 1953. After this he played less often, though he toured with Benny Goodman in 1958, played on Miles Davis's Sketches of Spain, and worked with the New York Jazz Repertory Company. He recorded four tunes as a leader in 1935, and led his own band i

Lost In Meditation - Instrumental on Mood Indigo by Taft Jordan

In A Sentimental Mood - Instrumental on Mood Indigo by Taft Jordan