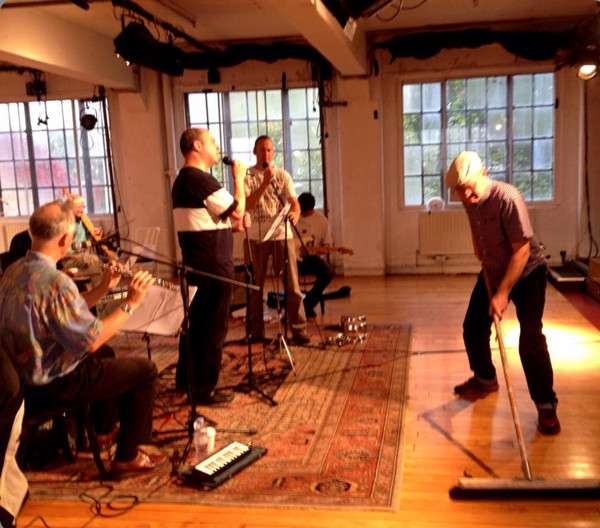 The 49 Americans was a British DIY post-punk/art pop supergroup, active from 1979 to 1982, and created by US expat Andrew "Giblet" Brenner in London. Brenner invited several free improvisers associated with London Musicians' Collective and local avant/experimental scene, including David Toop, Steve Beresford, Max Eastley, Lol Coxhill and Peter Cusack, as well as Nag (2) and Bendle of The Door And The Window DIY cult band, Viv Albertine (ex-The Slits), Vivien Goldman (who released art-punk classic Dirty Washing 12" on 99 Records, produced by John Lydon and Adrian Sherwood in 1981), Eddie Saunders, and other prominent musical and non-musical performers to participate in the self-described 'experiment in the pursuit of happiness.' According to Andrew Brenner, the 49 Americans were playing "because we wanted to play, enjoyed being together and seeing what each other could do; musicians and non-musicians surprising each other. We did not take ourselves seriously, but we were serious about that. […] Like the Statue of Liberty we held up a shining torch of self-entertainment! Saying: Have fun! Play! Participate! Everyone should be allowed to be an American." The group debuted with Wonder Only 85 Pennies 7" EP on Nag & Bendle's NB Records (4) in 1980 – 14 tracks split between U.S.A. and U.S.B. sides. A debut full-length E Pluribus Unum LP soon followed, self-released through Brenner's Choo Choo Train Records, and featuring naiveté songwriting approach similar to Maher Shalal Hash Baz, Red Crayola and early Beat Happening. Named after 'Out of Many, One' Latin quote which appears on most US coins, this album excessively stressed out in the liner notes, that it's 1. Representing the whole of the United States; especially, chosen as the best in the United States. 2. Composed of Americans or American materials exclusively. 3. Entirely within the territorial limits of the United States. 4. Of all the Americas. In reality, this album was recorded, produced and released in the United Kingdom. In 1982, the band released their second album, We Know Nonsense LP. This time The 49 Americans recorded a collection of happy-go-lucky pop songs, co-written and produced by David Toop and Steve Beresford, and covering a wide range of 'faux light music' styles, from doo-wop to disco and samba. Wire Magazine included this album in their legendary 100 Records That Set the World On Fire list in Issue #175, published in Sep 1998. For two decades, the short-lived 49 Americans remained mostly in the context of obscure DIY/art-punk bands, with all their 12" and LPs being out-of-print. In 2002, Seigen Ono re-released their full discography through his audiophile label Saidera Records in Japan: debut E Pluribus Unum ‎LP with bonus tracks from their first concert on Wonder CD, We Know Nonsense CD with 3 alternative studio versions as bonus, and Too Young To Be Ideal CD – compiling their debut Wonder 85 Pennies 7" single, Too Young To Be Ideal! 12" EP, and a few studio out-takes. On the occasion of Staubgold's 15th anniversary, the European label produced another digital reissue in 2013. First in the series, We Know Nonsense CD added 23 bonus tracks from E Pluribus Unum (1980) and Wonder Only 85 Pennies (1979) to the original We Know Nonsense LP (1982). Staubgold also reprinted E Pluribus Unum and We Know Nonsense on vinyl as is (w/o bonus material), followed by the download-only Too Young To Be Ideal compilation (tracklist identical to Saidera's Too Young To Be Ideal Japanese CD). In light of these reissues, some members of The 49 Americans reunited for a few live concerts and performances.

It's Time on We Know Nonsense by The 49 Americans

Beat up Russians on E Pluribus Unum by The 49 Americans

Edible on We Know Nonsense by The 49 Americans

Tendency to Lie on We Know Nonsense by The 49 Americans

Verbal Culture on We Know Nonsense by The 49 Americans