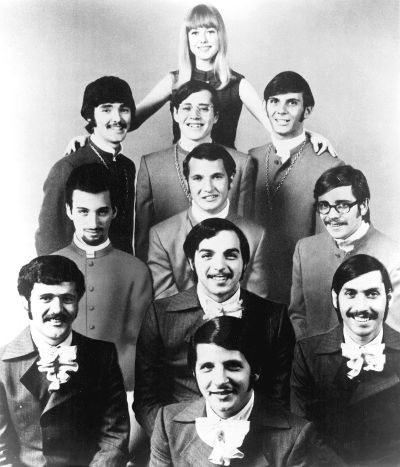 Johnny Maestro and The Brooklyn Bridge (or simply The Brooklyn Bridge) is an American musical group, best known for their million selling rendition of Jimmy Webb’s "The Worst That Could Happen". Lineups Original: Vocals: Johnny Maestro, Les Cauchi, Fred Ferrara, Mike Gregorio. Musical Director Tom Sullivan, keyboardist Carolyn Wood, guitarist Richie Macioce, bass guitarist Jimmy Rosica, trumpeter Shelly Davis, saxophonist Joe Ruvio and drummer Artie Catanzarita. Current: Vocals: Fred Ferrara, Les Cauchi, keyboards and vocals Marty D'Amico, bass and vocals Jimmy Rosica, guitarist Jim Sarle and drummer Lou Agiesta. (This lineup also previously included members Ed Lisciandro (guitar and vocals), who was with the group for some of their earlier [PBS] performances, and Richie Bono, who played saxophone on many of their earlier recordings. Johnny Creole (Johnny Riccio) (a Buddah protege) was a member of the second wave of Brooklyn Bridge as a vocalist & guitarist. His Buddah release BDA-SP 1000 of 'Caroline' was an audition record introducing him in 1969. He was drafted soon after.