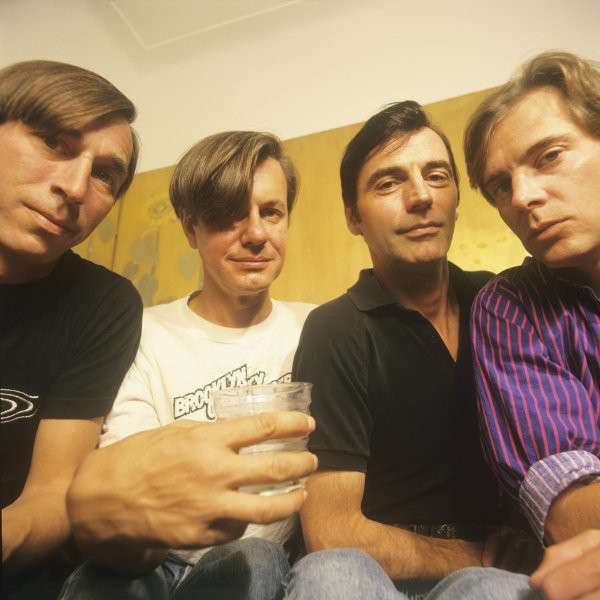 Group from New York City, formed in the late 1970s. Often tagged as garage rock revivalists, the Fleshtones mix the fuzz guitar and Farfisa organ sounds of that genre with rockabilly, '50s and '60s R&B, and surf into a potent retro stew the group likes to call "super rock." The group formed in 1976 in Queens with vocalist/keyboardist Peter Zaremba, guitarist Keith Streng, bassist Jan Marek Pakulski, and drummer Bill Milhizer and aimed to return rock & roll to the simplicity and unself-consciousness of the '50s and early '60s. (The group was often joined on-stage and in the studio by sax player Gordon Spaeth, who passed on in 2005.) The group fit nicely into New York's punk and new wave scene, and an early single, "American Beat," attracted the attention of independent label Red Star and, in time, I.R.S. The group's debut EP, Up-Front, was released in 1980 and was followed by their first full-length album, Roman Gods, and Blast Off!, an unreleased studio album recorded for Red Star in 1978. 1983 produced Hexbreaker, widely regarded as the Fleshtones' finest album. The band continued to record through the '80s and released Powerstance in 1992 and Beautiful Light in 1994. (Powerstance also marked the debut of new Fleshtones bassist Ken Fox, who replaced Pakulski in the lineup and has been with the group ever since.) While the group's popularity dipped under the radar in the last half of the '90s, in 2003 the group bounded back when they were signed to the potent indie label Yep Roc Records and released one of their best albums, Do You Swing? An equally solid follow-up, Beachhead, was issued in 2005 and was produced in part by Detroit garage rock kingpin Jim Diamond. Fleshtones side projects include Keith Streng's band Full Time Men, which featured R.E.M. guitarist Peter Buck, and Peter Zaremba's Love Delegation. In 2008, more than 30 years after the group formed, they released Take a Good Look, proving their ability to be just as raucous as they were in the good ol' days.

Alex Trebek on Face of the Screaming Werewolf by The Fleshtones

No Tengo Dinero on Quatro x Quatro by The Fleshtones

Haunted Hipster on Mondo Zombie Boogaloo by The Fleshtones, Southern Culture on the Skids & Los Straitjackets

Ghoulman Confidential on Mondo Zombie Boogaloo by The Fleshtones, Southern Culture on the Skids & Los Straitjackets

Hurray for Santa Claus on Stocking Stuffer by The Fleshtones

Dracula a GoGo on Mondo Zombie Boogaloo by The Fleshtones, Southern Culture on the Skids & Los Straitjackets