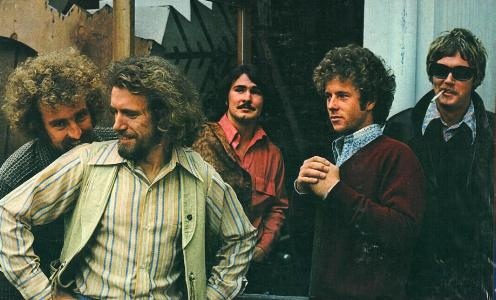 The Flying Burrito Brothers was an early country rock band founded in 1968, best known for its influential debut album, 1969's The Gilded Palace Of Sin. Although the group is most often mentioned in connection with country rock legends Gram Parsons and Chris Hillman, the group underwent many personnel changes. Chris Hillman and Al Perkins joined Manassas, while Byron Berline, Roger Bush and Kenny Wertz formed Country Gazette. Roberts reassembled a new group for a 1973 European tour, and then began a solo career before forming Firefall with Michael Clarke. A more Nashville-centered incarnation of the band led by Gib Guilbeau and John Beland recorded & toured through the 1980s as Burrito Brothers. Sneaky Pete Kleinow began using the Flying Burritos Bros name again in the mid 1980s, eventually being joined by Gib and John. Through numerous incarnations (nearly all with Beland at the helm), the band released albums and toured throughout the 1980s and '90s. The latter day Flying Burrito Brothers CDs, produced by Beland, did feature an impressive line-up of guests, including Merle Haggard, Buck Owens, Waylon Jennings, Alison Krauss, Ricky Skaggs, Charles Louvin, and others. The band's final two CDs, California Jukebox and Sons Of The Golden West received solid critical reviews, but Beland called it quits for the band in 2000, and embarked upon a successful career as a record producer. Sneaky created a Burritos spin-off in his new band Burrito Deluxe, which featured Carlton Moody (2) on lead vocals and Garth Hudson from The Band on keyboards. The band scored no chart success, relying solely on live appearances in Europe. Pete left the band due to illness in 2005, leaving no direct lineage to any of the actual Flying Burrito Brothers members, past or present, although it carried on until 2010 when it became The Burritos, and then in 2014 The Burrito Brothers. Key band members included: Gram Parsons, Chris Hillman, Sneeky Pete Kleinow, Chris Ethridge, Michael Clarke, and Bernie Leadon.