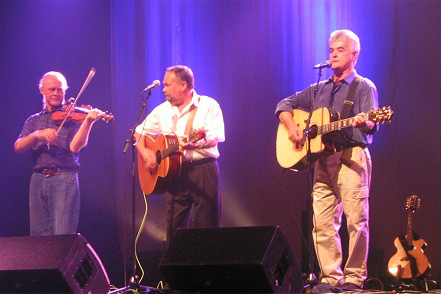 The Hennessys originally had three members: Frank Hennessy, Dave Burns and Paul Powell. Nowadays, they usually appear as Frank (guitar, main vocals and composer), Dave (mandolin and vocals), and Iolo Jones (fiddle). In 1966, along with Dave Burns, he won Cardiff City Council’s “Spotlight on Youth” competition, paving the way for them both and Paul Powell to turn professional as the folk group Hennessys. They moved to Ireland where they honed their skills on the thriving folk music circuit. It was while in Ireland that the idea came for them to sing a song or two in Welsh to show that they were different from the countless other folk and ballad groups of the time. They enlisted the help of one of Wales’ finest folk musicologist, Meredydd Evans, and so began a long and fruitful friendship which led to much more Welsh material in their repertoire. After taking a break from music in the seventies to concentrate on his family, Frank Hennessy was asked to present a radio programme in 1978, and has been a regular ever since.