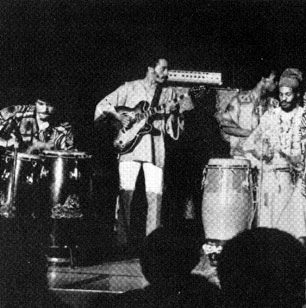 The Pharaohs, a soul/jazz/funk group, were formed in 1962 out of a student band, The Jazzmen, at Crane Junior College in Chicago. This early incarnation comprised Louis Satterfield on trombone, Charles Handy on trumpet, and Don Myrick on alto saxophone. They were joined by Fred Humphrey on piano, Ernest McCarthy on bass guitar and Maurice White on drums. Satterfield, White, and Handy were studio musicians at Chess Records in Chicago. On the South Side of Chicago the Affro-Arts Theater offered concerts, as well as classes in music and dance. As the name suggests the theater represented the strong African-American nature of the area and the times. It was here that the Jazzmen merged with the Artistic Heritage Ensemble to form The Pharaohs. In 1971 the band recorded The Awakening, and in 1972 In the Basement. With cuts like The Pharaohs Love Ya'll and In the Basement these albums established The Pharaohs as a force, if only on the cult level, for several years. Many of the Afro-Sheen commercials from this period featured music of the Pharaohs. By the early seventies, Maurice White had had some success with the Ramsey Lewis Trio and recorded a demo with several Chicago musicians. After signing with Warner Brothers he assembled the band which was to become Earth, Wind & Fire. Some of the other members of the band released another album under the name Sky (18) in 1979.

Louie Louie on Have "Louie" Will Travel by Richard Berry

Besame Mucho on Have "Louie" Will Travel by Richard Berry

Rock, Rock, Rock (This Dance Is Crazy) on Have "Louie" Will Travel by Richard Berry

Crazy And Wild on Blue Egypt by The Pharaohs

Wild Thing on Blue Egypt by The Pharaohs

Radar Love on Blue Egypt by The Pharaohs

Sweet Sugar You on Have "Louie" Will Travel by Richard Berry