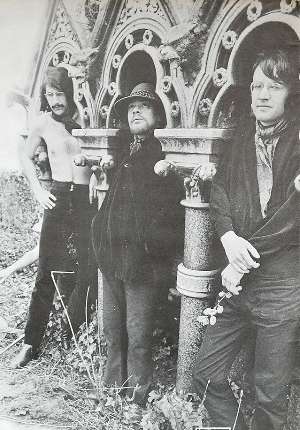 British experimental rock and folk cross-culture band. The Third Ear Band were rooted in 1960's London underground scene, and stem from two bands: 1. the duo Giant Sun Trolley: Glen Sweeney (percussion) and Dave Tomlin (guitar, violin, voice), and 2. a parallel band called Hydrogen Jukebox: Glen Sweeney (percussion), Barry Edgar Pilcher (sax), Dick Dadem (trombone) and Clive Kingsley (guitar). The Third Ear Band started life circa 1967/68 as a some sort of psychedelic rock and jazz group, although no recordings are known. After a concert at the Middle Earth Club in July 1969 when a lot of their equipment was stolen, the guitarist called it a day, but the rest of the band decided to keep on. But, what to do? They had no money. Soon, after a total rethink the all acoustic Third Ear Band was born, featuring: hand drums, violin/viola, oboe/recorder, and cello. Unquestionably the strangest band on the Harvest label, and enthusiastically championed by DJ John Peel, the Third Ear Band invented a new genre of instrumental music, rooted in the medieval, but with Eastern ethnic elements and aesthetically "rock" avant-garde. Their most famous release is the soundtrack to Roman Polanski's "Macbeth". During the 1970's the band went through numerous changes, mostly only documented by live appearances and radio sessions. In the 1980's they reformed for a special one-off at an Italian festival, after which a new Third Ear Band existed for more years than the original, recording several more albums.

Fleance on Music From Macbeth by Third Ear Band

Druid One - 2019 Remaster on Alchemy by Third Ear Band

The Banquet on Music From Macbeth by Third Ear Band

Overture: Macbeth on Music From Macbeth by Third Ear Band