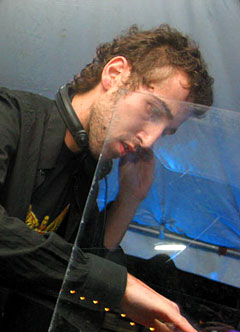 Born in 1975. Part of the duo Daft Punk, producer and writer. Son of Daniel Bangalter AKA Daniel Vangarde, who composed D.I.S.C.O. for Ottawan. After the experience of Darlin' and before the Daft Punk phenomena, Thomas Bangalter released the two famous EP's 'Trax On Da Rocks', a composite of various samples set to funky House and Techno beats. He released 'Music Sounds Better With You' on his own label Roulé as part of Stardust as well as his remix for "Rock Shock" by Roy Davis Jr.. In 1998, his track 'Gym Tonic' was the center of a 'scandal' as Bob Sinclar included it on his album "Paradise" without the consent of Bangalter. This resulted in a law suit intended by guru fitness and actress Jane Fonda whose voice was illegally sampled on the record. A very 'anonymous' person, Bangalter nontheless gave a few interviews in and out of the Daft Punk phenomena. Although a lot of people credit him for the invention of 'filtered house', he cited Carl Craig AKA Paperclip People ("Throw") and Kenny "Dope" Gonzalez as precursors of the style. It must also be noted that outside Daft Punk, Bangalter stopped his DJing career due to ear problems. Bangalter is married to French actress Elodie Bouchez with whom he has two sons: Tara-Jay (born 2002) and Roxan (born 2008).

Sangria on Climax by Various Artists

What to do on Climax by Various Artists