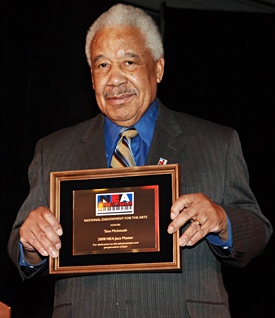 Tom McIntosh (born February 6, 1927 in Baltimore, Maryland, USA) is an American trombonist, composer and arranger. He has worked with Dizzy Gillespie, James Moody, Milt Jackson, Duke Ellington and Tommy Flanagan, among others. He was also one of the founding members of New York Jazz Sextet. In 1969, McIntosh moved to Hollywood to pursue a career in film music composing. He worked as an occasional composer and music director for films and television for 20 years before returning to New York in the 1990's.

Long Ago and Far Away (feat. Benny Golson, Kenny Barron, James Moody, Jimmy Owens, Richard Davis & Stefon Harris) on With Malice Toward None by Various Artists