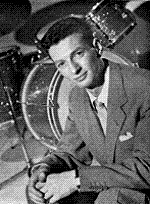 Cyril Anthony 'Tony' Kinsey (born 11 October 1927) is an English jazz drummer and composer.Kinsey was born in Sutton Coldfield. He held jobs on trans-Atlantic ships while young, studying while at port with Bill West[disambiguation needed] in New York City and with local musician Tommy Webster in Birmingham. He had a close association with Ronnie Ball early in his life; the two even had a double wedding together. Kinsey led his own ensemble at the Flamingo Club in London through the 1950s, and recorded on more than 80 sessions between 1950 and 1977, including with Tubby Hayes, Bill Le Sage, Ronnie Scott, Johnny Dankworth, Tommy Whittle, Joe Harriott, Lena Horne, Frank Holder, Ella Fitzgerald, Ben Webster, Clark Terry, Harry Edison, Buddy DeFranco, Billie Holiday, Oscar Peterson, and Sarah V

Star Prizes (A) on Kpm 1000 Series: Entertainment by Tony Kinsey