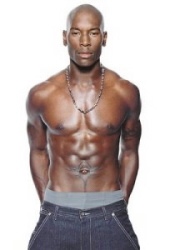 Tyrese Darnell Gibson (born December 30, 1978), also known mononymously as Tyrese, is an American Grammy-nominated R&B singer, songwriter, actor, author, television producer, former fashion model and MTV VJ. He is best known for his roles as Joseph "Jody" Summers in Baby Boy and as Roman Pearce in the The Fast and the Furious series. After releasing several albums, he transitioned into films, with lead roles in several major Hollywood releases.

Sweet Lady on Tyrese by Tyrese

Signs of Love Makin' on I Wanna Go There by Tyrese

Lately on Tyrese by Tyrese

Shame on Black Rose by Tyrese

Stay on Open Invitation by Tyrese

On Top Of Me on I Wanna Go There by Tyrese

Nobody Else on Tyrese by Tyrese