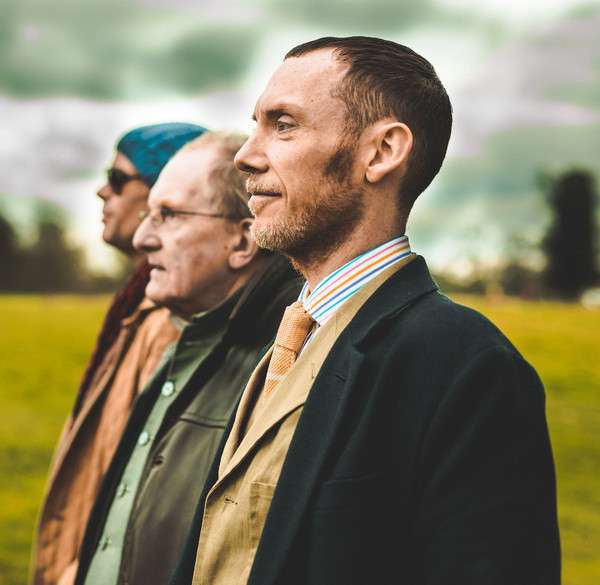 Indian fusion group from London, UK. Uniting Of Opposites is the new musical venture from Tim Liken, Clem Alford and Ben Hazleton; which brings together a melting pot of cultures and inspiration. Signing to Tru Thoughts in 2018, the group have been using new technology as an oppurtunity to explore and merge aspects from across the musical spectrum. Named after the ‘Ancient Lights’ English property law that gives home owners the right to receive natural light, the LP (out 18th May on Tru Thoughts) brings together creature musical forces, colliding to continuously redefine the music itself and expressive a fluidity that’s found at the heart of Uniting of Opposites’ ethos. Japanese artist Tokio Ayoama – who Dazed called “a modern day surrealist, inspired by everyone from Salvador Dali to Sun Ra” – channels this vibe into the bespoke hand-painted artwork. Uniting of Opposites was established when, within the myriad forms of jazz, Ben Hazleton met Clem Alford and begun studying the classical Indian tradition in order to “open [his] ears to new melodic and rhythmic possibilities”. A lover of all types and styles of music, Tim Liken got involved to fuse together a collective musical journey, creating Uniting of Opposites; a platform for worlds to collide. The trio are joined by Eddie Hick (Sons of Kemet, Roots Manuva, Omar Puente, Dave Walsh, Ruby Rushton, Lucky Ranku, Bhupinder Chaggar, Ronnie Bottomley) on drums, Idris Rahman (Soothsayers, Arun Gosh) on clarinet, Manjeet Singh Rasiya on tabla and the vocals of Marcina Arnold (Bheki Msieleku & Busi Mhlonga, Steve Williamson, Byron Wallen, Jason Yarde, Quite Sane, F'ire Collective). Coming from a DJ/producer background, Tim Liken started making music in 1995, setting up one of the UK’s original garage labels, Ice Cream Records, and later spawning the monikers Double 99 and Tim Deluxe (under which he released the dancefloor anthems “Ripgroove”and “It Just Won’t Do”). Clem Alford’s musical journey began when he purchased a sitar and a Jayasri Banerjee record before hitch-hiking to India in 1968 to be taught sitar by Pandit Sachindra Nath Saha (Banerjee’s father). Over the past five decades Alford has recorded for EMI and collaborated with western musicians and pop groups to film composers, including Amancio D’Silva, John Williams, John Mayer, John Dankworth and Hemmant Kunar. Having been named ‘Young Jazz Musician of the Year’ in 2003, Ben Hazleton is predominantly a jazz double bass player and has played with many of the British Jazz greats, performing regularly with The Tony Kofi Quartet and The Jonathan Gee Quartet.

Mints on Ancient Lights by Uniting Of Opposites

Vortex Number 9 on Ancient Lights by Uniting Of Opposites

Dr. Roach on Ancient Lights by Uniting Of Opposites

The Uniting of Opposites on Ancient Lights by Uniting Of Opposites

Bird Solo on Ancient Lights by Uniting Of Opposites

Corridor Moves on Ancient Lights by Uniting Of Opposites