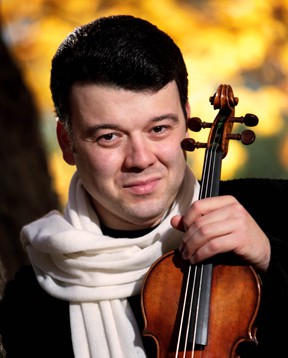 Vadim Gluzman (Вадим Михайлович Глузман, born 1973) is a Ukrainian-born Israeli classical violinist.Born in the former Soviet Union, Vadim Gluzman spent most of his childhood in Riga, Latvia. His father is a conductor and clarinet player, and his mother a musicologist. Gluzman began violin studies at age 7. He studied with Roman Šnē in Latvia and Zakhar Bron in Russia. In 1990, his family moved to Israel, where he became a student of Yair Kless. He also met Isaac Stern who became an important mentor. In the United States, Gluzman's teachers were Arkady Fomin and, at the Juilliard School, Dorothy DeLay and Masao Kawasaki. Early in his career, Gluzman enjoyed the encouragement and support of Isaac Stern. In 1994, he received the Henryk Szeryng Foundation Career Award.