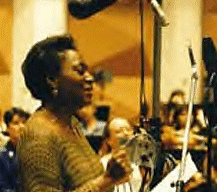 Venetta Fields (born 1941, Buffalo, New York, USA) is an American-Australian singer, musical theater actress and vocal coach. She was a backing vocalist for American and British rock and pop acts of the 1960's and 1970's. Since 1982 she has lived and worked in Australia, and holds dual Australian-American citizenship.