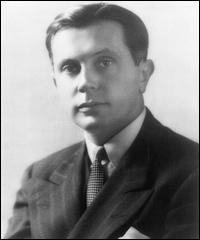 p, 1903-1969 US, Parafjanava
Composer / Songwriter of Classical, Jazz and Soundtrack
A.k.a. Vladimir Dukelsky

Russian-American composer and songwriter. Born: 10 October 1903 in Parafjanawa, Russian Empire (now Belarus). Died: 16 January 1969 in Santa Monica, California, USA (aged 65). Born Vladimir Dukelsky, he grew up in Kiev and showed remarkable musical talent at an early age; he was admitted to the Kiev Conservatory when he was only eleven years old. At the Conservatory, he studied with the composer Reinhold Glière, and one of his contemporaries there was the young Vladimir Horowitz. Duke was inducted into the Songwriters Hall of Fame in 1970. His family fled Russia in 1919 at the outbreak of the Russian Revolution and spent eighteen months in Constantinople. In 1921, the Dukelsky family obtained United States visas and emigrated to New York. Vladimir became friends with George Gershwin, who suggested that he Americanize his name to Vernon Duke. He used his pen name for popular music and used his given name when writing classical music or Russian poetry (until 1955, when he dropped the name Dukelsky). He moved to Paris in 1924 and wrote classical music (as Dukelsky) for Ballet Russes and also composed his First Symphony (1928). He became close friends with composer Sergei Prokofiev as well as Pablo Picasso and Jean Cocteau. He also traveled to London and contributed to musical comedies (as Vernon Duke). In 1929, he returned to New York and began writing for Broadway, partnering with E.Y. Harburg to write his first pop hit "April in Paris." Duke's songs "April In Paris" (1932), "Autumn In New York" (1934), "I Like The Likes Of You" (1934), "Water Under the Bridge" (1934), and "I Can't Get Started" (1936), were hits of the 1930s. Dukelsky became a US citizen in 1936 (some sources say 1939) and took Vernon Duke as his legal name. During World War II, he served in the US Coast Guard, where he wrote the score for a Coast Guard revue, "Tars And Spars", starring the young and then-unknown Sid Caesar. After the war, his career lulled, and he lived in France, eventually settling in California in 1948. By 1955, he dropped the name Dukelsky, and from then on both his classical and popular compositions were credited to Vernon Duke. In that same year, he published an autobiography, "Passport To Paris", and in 1957 he married singer Kay McCracken. Vernon Duke died during an operation for lung cancer in Santa Monica, California on 16 January 1969.

Can't Get Started on Songs from My 3rd Life by piKziL

Prelude on Misia by Various Artists

Factory Ballet on Sweet Bye and Bye by Various Artists