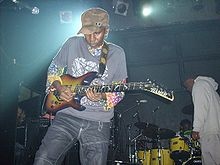 Vernon Alphonsus Reid (born 22 August 1958) is an English-born American guitarist, songwriter, composer, and bandleader. Best known as the founder and primary songwriter of the rock band Living Colour, Reid was named No. 66 on Rolling Stone magazine's 2004 list of the 100 Greatest Guitarists of All Time, although he was not included on the revised 2011 list.Critic Steve Huey writes, "[reid's] rampant eclecticism encompasses everything from heavy metal and punk to funk, R&B and avant-garde jazz, and his anarchic, lightning-fast solos have become something of a hallmark as well."

The Unforgiven on Metallic Metal by Various Artists

Who Are You? (Mutation 1) on MISTAKEN IDENTITY by Vernon Reid