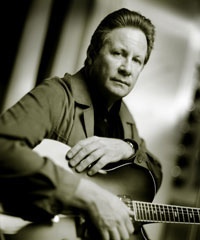 Victor E. Jurusz, Jr., known professionally as Vic Juris (born September 26, 1953) is an American jazz guitarist.The New Jersey-born Juris played with Lyn Christie early in the 1970s and made his first recordings with Eric Kloss in 1975. Soon after he joined Barry Miles (musician)'s group, remaining with Miles well into the 1980s. He recorded with Richie Cole during 1976-78 and released his first albums as a leader in the late 1970s.[citation needed]

Minor Swing on A Tribute to Django Reinhardt by Biréli Lagrène

Paris on A Tribute to Django Reinhardt by Biréli Lagrène

Nessun dorma (From the opera "Turandot") - None Shall Sleep on Liebman Plays Puccini: A Walk In the Clouds by Dave Liebman

Golden Earrings on Songs One by Phil Woods & Vic Juris

Medley: When the World Was Young / Yesterday When I Was Young on The London Sessions by Mel Tormé

E Luce Van Le Stelle (From the opera "Tosca") - The Stars Were Shining on Liebman Plays Puccini: A Walk In the Clouds by Dave Liebman