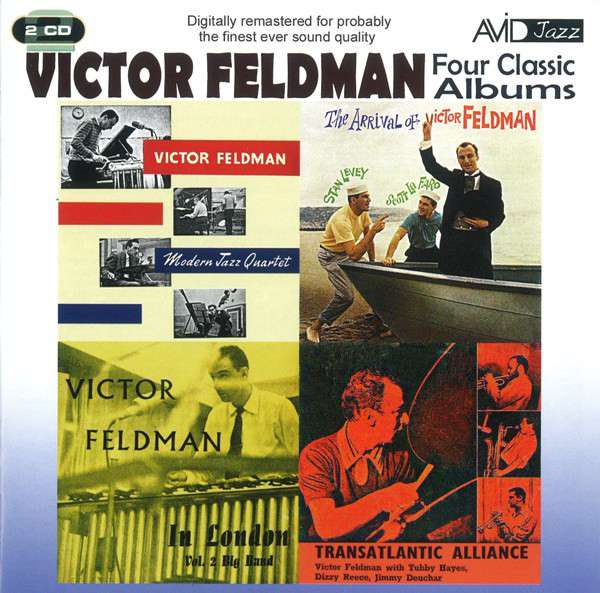 AVID Jazz here presents four classic Victor Feldman albums including original LP liner notes on a finely re-mastered and low priced double CD. “Transatlantic Alliance”, “Victor Feldman Modern Jazz Quartet”, “The Arrival Of Victor Feldman” and “Victor Feldman In London (Vol 2)”. Victor Feldman was a jazz musician with a foot on both sides of the Atlantic. In the late fifties he was recording albums both in Britain and in the States and was the envy of many a struggling British jazz musician. Feldman had emigrated to the USA in 1955 and played with the likes of Frank Rosolino, Bob Cooper, Leroy Vinnegar and Marty Paich and had impressively been signed to the famed Contemporary label. Our featured albums come from both sides of the pond. The 1956 set “Transatlantic Alliance” features British label Tempo stars Tubby Hayes, Dizzy Reece and Jimmy Deucher playing in a variety of different sized bands. “The Victor Feldman Quartet” from 1955 is the last of the Tempo label recordings before he moved to the States and quickly secured a spot in the Woody Herman Herd! “The Arrival of Victor Feldman” finds our man recording in Los Angeles in 1958 accompanied by Stan Levey on drums and Scott La Faro on bass who would go on to play with legendary pianist Bill Evans before dying tragically in a car crash at only 25 years old. We conclude with “Victor Feldman in London (Vol 2) featuring Feldman in a variety of permutations from a big band to a nine-tet to a quintet. The musicians involved were a veritable who’s who of British jazzmen including the likes of Tubby Hayes (who plays an amazing solo on baritone sax), Jimmy Deucher, Dizzy Reece, Phil Seaman and Ronnie Scott. Feldman, by the way can be heard not only on his customary vibes but also on his other instrument of choice - drums! All four albums have been digitally re-mastered for probably the finest ever sound quality!