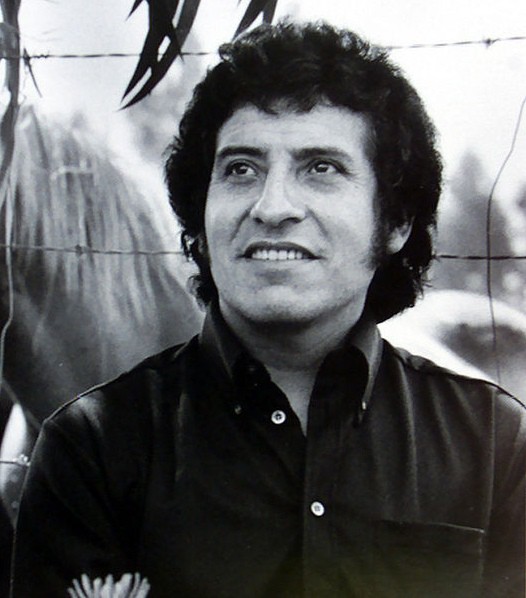 Chilean poet and singer, one of the most influential Latin American artists of the 20th century. Born 23rd September 1932 in Lonquén (Chile). He was murdered shortly after Pinochet's coup on September 11th, 1973. After singing in a University Chorus, his musical career started in 1957 when he met Violeta Parra who encouraged him to write his own songs. He joined Conjunto Cuncumen, a folk band that published an album that year of the same name where Victor sang "Se me ha escapado un suspiro". On their second album "Villancicos Chilenos" (1958) he sang "Doña María te ruego" and "Décimas por el nacimiento". At this time he also started working as a theatre director. On their third album, "Una Geografía Musical de Chile" (1962) he wrote/sang "Paloma quiero contarte"/"Canción del minero". In 1965, he started his solo career with a single: "Paloma quiero contarte"/"La beata". From 1966 to 1969 he was also musical director of Quilapayún. Original discography: * Victor Jara [aKA "Canto a lo Humano"] (1967, Demon) * Víctor Jara [aKA "Desde Lonquén hasta siempre"] (1967, Odeon) * Canciones folklóricas de América (with Quilapayún) (1968, Odeon) * Pongo en tus manos abiertas [aKA "Te recuerdo Amanda"] (1969, DICAP) * Canto Libre (1970, Odeon) * El derecho de vivir en paz (1971, DICAP) * La población (1972, DICAP) * Canto por travesura (1973, DICAP) Some songs were released as singles in 1972/73 and other unreleased songs were later issued with different names as "Manifiesto", "Víctor Jara: Presente" and "Canciones Póstumas".