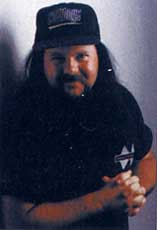 Vincent Paul Abbott, also known as "Vinnie Paul" (born March 11, 1964) is an American professional drummer and producer who is best known for being a former member, and co-founder, of the heavy metal band Pantera. He is currently a member of supergroup Hellyeah. He also co-founded the heavy metal band Damageplan in 2003 with his younger brother, Dimebag Darrell. Abbott was also a member of the Country-Rock band "Rebel Meets Rebel,", alongside his brother "Dimebag Darrell"