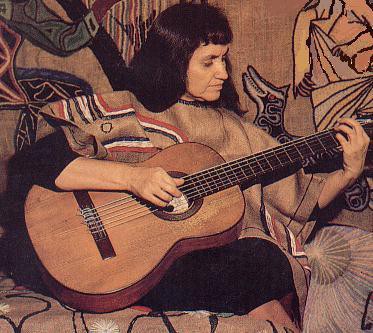 Violeta Parra (born October 14, 1917 in San Carlos de Itihue, Chile) was a notable Chilean folklorist and visual artist. She set the basis for Nueva Canción Chilena, a renewal and a reinvention of Chilean folk music. Parra revived the Peña, (now known as La Peña de Los Parra), a community center for the arts and for political activism. Her most renowned song, Gracias a la Vida, was popularized throughout Latin America by Mercedes Sosa and later in the US by Joan Baez. It remains one of the most covered Latin American songs. From 1949 to 1952 she formed a duo with her sister, Hilda Parra: "Las Hermanas Parra". She also had other brothers dedicated to music, as Roberto Parra, Lautaro Parra and Lalo Parra, or poets, as Nicanor Parra. She´s also the mother of Isabel Parra, Angel Parra and as well grandmother of Tita Parra, Angel Parra (2) and Javiera Parra. Violeta Parra committed suicide with a gunshot on February, 5, 1967, in Santiago, because of her depression over the breakup of her relationship with Gilbert Favre. Along with Gabriela Pizarro and Margot Loyola she´s considered one of the most important, central, essential and former members of the chilean folklore history and the duty of collecting, testify (recording) and investigate the origins, develop and richness of the native rural music of her country.