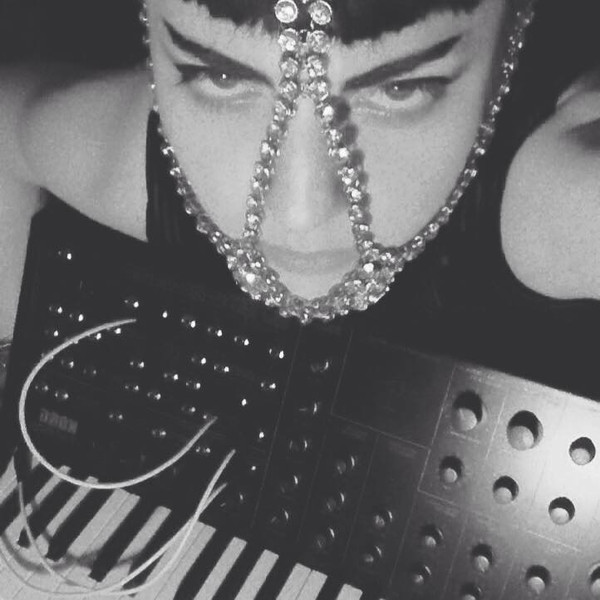 Void Vision is a Philadelphia-based electronic project helmed by Shari Vari. It began around 2009 at a time when a wave of synth-revivalists were materializing, but the quality of the songwriting and intense vocals set the band apart from the pack. In a rare instance, Void Vision has managed to combine vintage dance elements with melodic structures, haunting melancholy, and lyrics that have a palpable soul. The songs themselves are dynamic, referencing a cross-section of the last 30 years of electronic music, while simultaneously retaining a uniqueness all their own. The infamous Wierd Records weekly club night in New York, which showcased a variety of talented electronic and coldwave artists, served as an incubator for Void Vision in it’s early stages. After a standout debut performance at the club, they immediately caught the attention of Blind Prophet Records, who consequently released their first 7″ single, ‘In 20 Years’, which received excellent reviews. Vari has continued performing and recording steadily over the last few years, releasing songs on compilations for various labels, including Rough Trade, and in 2012 the song ‘Everything is Fine’ was selected for Artforum magazine’s ‘Best of 2012′ issue. In 2013, Void Vision toured the West Coast and later that year released a split 12″ with Portland-based band, Vice Device. The first official full-length album, entitled ‘Sub Rosa’ is set to debut on Berlin-based Mannequin Records, followed by a European tour in 2015. Shari Vari formed Void Vision in 2009 originally as a duo, during the explosion of the new minimal synth and cold wave scene in United States. Sharing the same scene of the Wierd Records associates like Led Er Est, Martial Canterel, Xeno & Oaklander, Automelodi, in 2010 VV released ‘In Twenty Years’ on Blind Prophet (Sean Ragon’s Cult Of Youth record label), receiving also the attention of the Rough Trade dudes, who asked to put out a track for one of their synth wave compilations. After other split vinyls, tapes and compilations, Mannequin approached Shari with the intention to continue what Wierd Records started, giving a proper shape to her beautiful and youthful dark electronic sound. The result is 10 hypnotic cold analog tracks dominated by the warm and fragile Shari’s voice, some more “pop orientated” some others belonging to the original “cold wave” atmosphere.

The Source on Sub Rosa by Void Vision

Everything Is Fine on Sub Rosa by Void Vision

One on Sub Rosa by Void Vision

To the Sea on Sub Rosa by Void Vision

Sour on Sour by Void Vision

In 20 Years - (Extended Version) on Sub Rosa by Void Vision