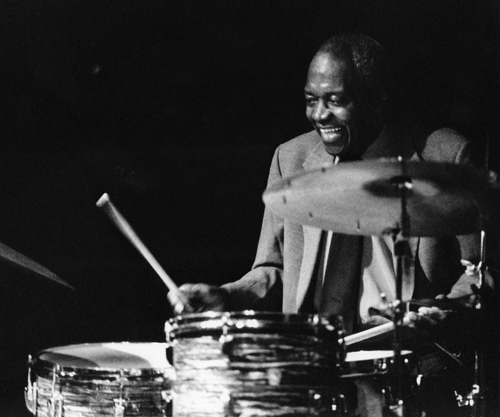 Walter "Baby Sweets" Perkins (February 10, 1932, Chicago, Illinois – February 14, 2004, Queens, New York) was an American jazz drummer.Starting out as a fixture in the Chicago jazz scene, Perkins' first major gigs were with Ahmad Jamal in 1956–57. He recorded for Argo Records in 1957 as a leader under the name MJT+3, along with Paul Serrano on trumpet, Nicky Hill on tenor sax, Muhal Richard Abrams on piano and Bob Cranshaw on bass. In 1959, he regrouped under the same name with Willie Thomas on trumpet, Frank Strozier on alto sax, Harold Mabern on piano, and Cranshaw on bass; they recorded for Vee-Jay in 1959 and 1960 and played in Chicago until 1962, when he moved to New York City.

You Hook Me Baby on Solid Original Rock by Various Artists

You Hook Me Baby on Fright'nin by Various Artists