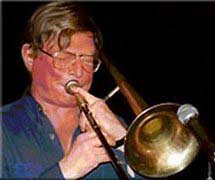 Born: November 17, 1931 in Manchester, Connecticut, USA. Died: August 26, 2003 in New York, New York, USA. American trombonist. Began studying trombone at the age of 15. Had his first gig playing with Charlie Spivak's band in his early twenties. Played with various bands and orchestras in the 50's after serving a stint in the military. After 1958, did mostly freelance work, backing such acts as Art Farmer, Toots Thielemans, Gerry Mulligan, Benny Goodman, Astrud Gilberto, Wes Montgomery, Manny Albam, Kenny Burrell, Patti Austin, The Manhattan Transfer, Steely Dan, Alice Cooper, and dozens more. He remained active until shortly before his death from cancer at the age of 71.