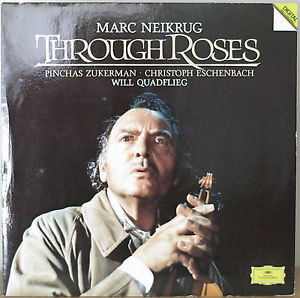 Composer note: Commissioned by the 92nd Street Y in New York, Through Roses was written over a period of 15 months in 1979-1980. The original conception evolved from various sources, foremost being my need for a non-operatic, dramatic form in which to express myself. Around this time I heard a story about a musician who had been forced to perform in a concentration camp. Gradually an idea began to develop: to write a “play with music” in which the protagonist is a violinist who survived the death camps. This gave me the possibility of integrating music that he may have played with music of my own composition. My objective was to create a form in which both theatrical and musical elements have unconstricted freedom. The actor moves within a set; his actual speech patterns are not regimented, the text and music being connected by means of musical cues marking only the limits within which the actor’s phrases are to be spoken. The musicians are also on stage, as figments of the protagonist’s imagination. The musical and dramatic structures were developed simultaneously so that while both are able to exist independently, they also support each other in detail, as well as in overall shape. The drama is constructed like a series of concentric circles. As the man’s memories emerge, one leads inexorable to the next. In a sort of maniacal ritual he follows one thought after another, which brings him closer and closer to the central memory that haunts him — and gives the work its title. (One characteristic of trauma victims is the constant urge to relive the experience). The relationship between music, text, and action is one of psychological levels. The manifest stage actions is supported by text operating on a deeper level, full of associations and traumatic memories, while the music mirrors yet a deeper level, one beyond the possibility of verbal expression. The musical allusions in Through Roses at relevant points in the drama include fragments of military marches and popular songs, as well as Haydn (the slow movement from the “Emperor” Quartet, the melody of “Deutschland, Deutschland über alles”), Beethoven, Paganini, Wagner, Berg, Mozart, Schubert and Bach. When the protagonist recalls being forced to play Bach for the commandant of the camp, we hear this recollection as music: the violinist in the ensemble plays the opening of the Bach G minor Sonata. But it is a distorted form of the music he plays, reflecting the distortion of the event in the man’s memory. Without wishing to give a description of the action, I feel that certain background information is pertinent here. During World War II there were musicians in Hitler’s death camps who were kept alive in order to perform, they were made to play marches every morning and evening for the work details leaving and returning to the camp. They gave concerts at various camp sites, and played on other occasions at the whim of anyone in power. This included such sadistic ideas as having waltzes played faster and faster while old men were forced to dance until collapsing. Some specific details of the camp at Auschwitz are relevant to Through Roses. At the arrival point of the transport trains there was no sign to reveal where one was; there was however a fake clock, painted on the wall. The commandant lived just beyond the fence of the camp in a two-story house with his wife and two children. The house had a garden cultivated by his wife: a lawn, rows of flowers, rose bushes. The children played in this garden which was so close to the crematorium that on sunny days the shadows of the smokestacks fell on the lawn. Between the fence of the camp and the garden there was a pathway which went from inside the camp to the crematorium. Bodies were carried past the house along this pathway. — Mark Neikrug - Available on Compact Disc: Deutsche Grammophon 415 983-2 - Digital Recording - 8-pages multi lingual insert